This inspiring quote proved true in this amazing year that has just been. At the end of 2015 I have to say that it has been one of the most incredible years, jam packed with opportunities and I am grateful for the wonderful new creative experiences that came my way.

My New Year's resolution on 1 January 2015 was to STAY OPEN. Open to new ideas and opportunities and developments. I knew it was going to be a busy, special year with new challenges, to include a New York licensing fair and giving a presentation at an art conference as well as a whole new direction for my practice: online teaching.

After much thinking, and with the encouragement of my fellow artists and designers, in February I finally decided to offer an online art course. I developed a still life course, and over the next 7 months I worked on, and reworked and recorded video tutorials for the first  Explore Colour course. The courses sold out within days and I will be offering more options in 2016. 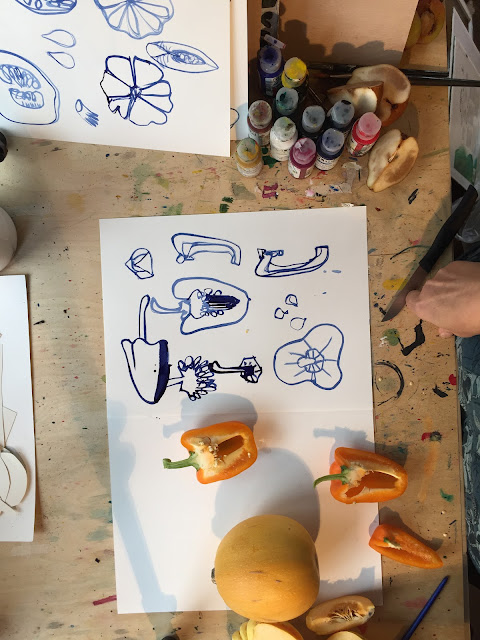 The Affordable Art Fair in Battersea is where I have an exhibition every March, represented by Will's Art Warehouse. The gallery also represented me at the Hong Kong AAF and Hampstead Heath AAF later in 2015.
In April I was artist in residence at the Reading Contemporary Art Fair where I guided visitors in the creation of an interactive painting. 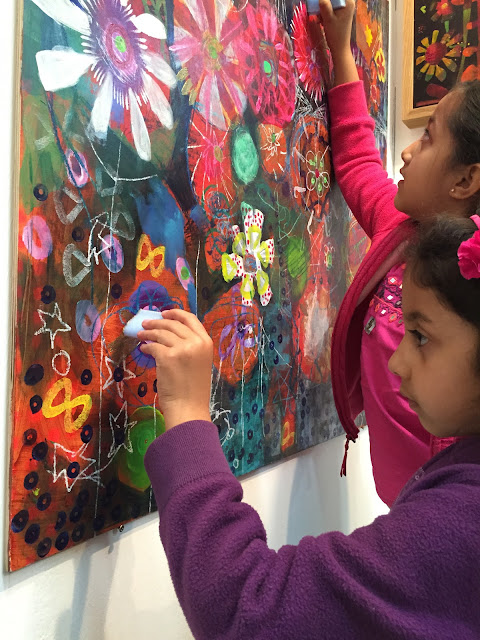 Open studios: I have only one event per year when my studio at home is open for three days to visitors. During the first long weekend of May I take part in the Henley Arts Trail. New paintings, work in progress, and items such as my glass casts are available directly from my studio.

In May I also travelled to New York for SURTEX, the licensing fair. It was a new experience to me, and new directions  and licensing outcomes will be realised in 2016. 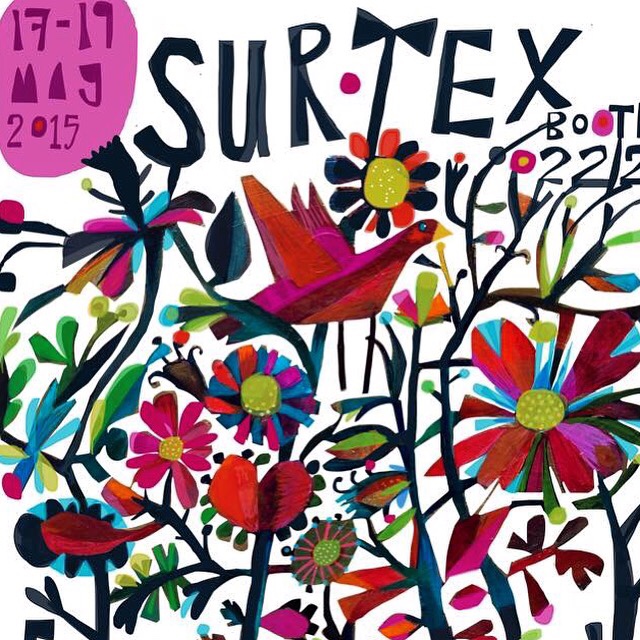 Work further afield: Adairs, a department store in Australia licensed three of my images and these are now available as  limited edition prints in their stores.

There are two new UK galleries now representing me as well, information on exhibitions with them to follow in the coming months.

Last summer I was a demonstrating artist at Art in Action, a wonderful four day long creative event promoting all kinds of art disciplines. I demonstrated alternative acrylic painting techniques and visitors were involved in creating interactive paintings. A very energetic and enjoyable event and I loved being part of it. I will be demonstrating again in 2016. 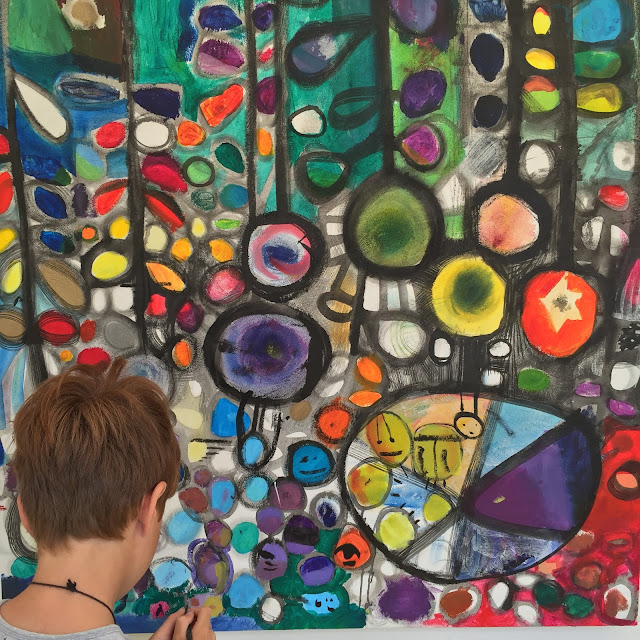 Once again I did a community project involving children and adults for BIG DRAW 2016, the theme was Every drawing tells a story. I used letters as inspiration for a large greeting card drawing project called #lettergardens. Around 1000 people participated in this project, including local schools, visitors to the Windsor Contemporary Art Fair, and art clubs and schools in America and Argentina. Wonderful and original artworks were created using the same template, see blogpost below. 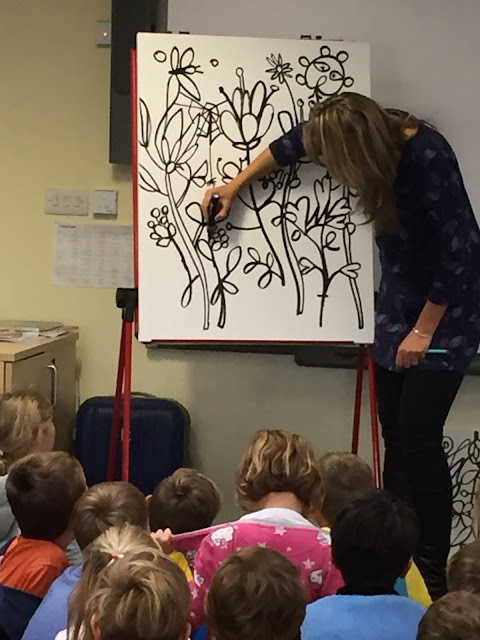 The highlight of this year for me has to be the GOLDEN Gathering, a conference for GOLDEN artists-educators in Fort Lauderdale in early December. As an Artist Educator for this outstanding professional artists' material, I did a presentation about interactive art projects. There were over eighty artists from around the world, a fantastic and unique event and I learned much from it as well.After the conference we attended Art Miami and Art Basel over four days. I exhibited in the Square Foot exhibition with Projects Gallery. Thisvisual overdose was followed by a trip I took down the Florida Keys ending in Key West. I have an inkling that my impromptu visit to the Audubon Museum will result in an interesting body of work based on his inspiring copper engravings of American birds. 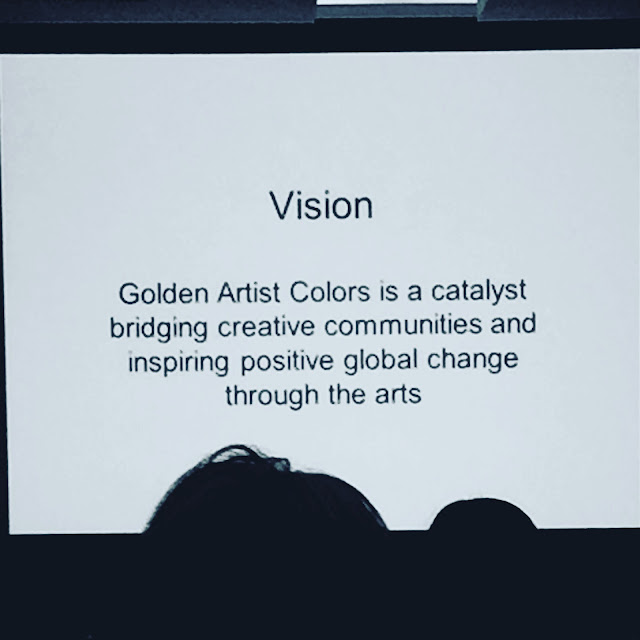 As the new year is just starting out, I am looking forward to another busy and eventful year. The last surprise of 2015 was the nomination of my painting Summer's Eve for  Artists and Illustrator's: Artist of the Year contest. It made the shortlist of 50, and here is the link for voting online. http://www.artistsandillustrators.co.uk/MacLeod2015

The paintings will be exhibited at The Mall Galleries in London in February when the winner will be announced. I say this is a surprise, as I have no idea who nominated me and only learnt of the contest when I was told I had made it to the shortlist. 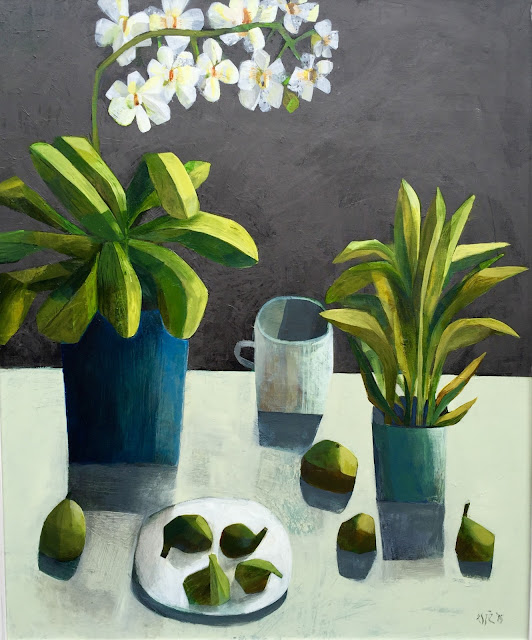 I supported two charities with three small paintings being auctioned and raffled this year, and thanks to the support from many they raised over £1000 for Starfish Greathearts and Sightsavers.
Kicking off 2016 I created another #drawwithletters painting.
A timelapse video of the creating process HAPPY NEW YEAR!
The end result is Tom cat. This 30x30cm acrylic on canvas painting is now available with all proceeds going to an animal charity in Cape Town South Africa. (Offers over £200) 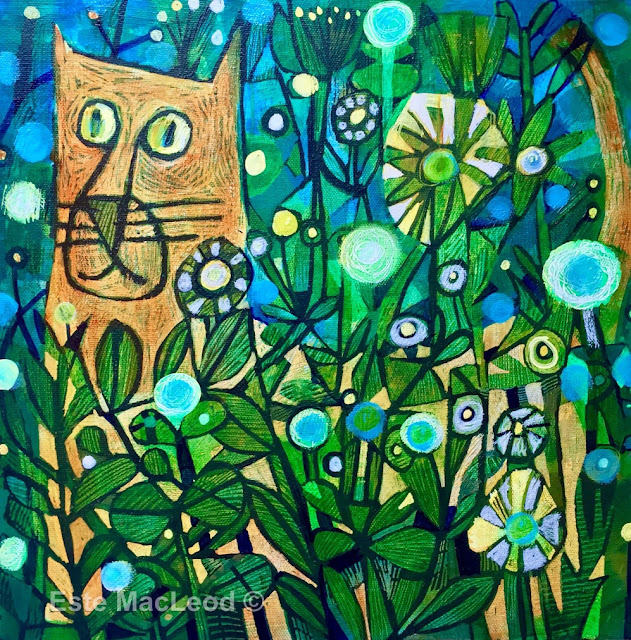 Some news about to happen in the next few months: In February my work will be exhibited at the Brussels Affordable Art Fair through Will's Art Warehouse. I've worked on a brand new month long e-course Creative Leap, this will start in February. More exhibition dates will be announced in January.

I look forward to see what 2016 will bring and I wish everyone a colourful and happy new year.